The New Orleans Saints played the Minnesota Vikings this Sunday to determine which team would make it to the NFC Conference Finals. The Saints were down 17-0 at the end of the first half but they rallied together to take the lead 24-23 in the last few seconds of the 4th Quarter. With time for one play left, Vikings running back Stefon Diggs was able to beat the New Orleans defence and secure a win for Minnesota.

Over the years, Drew Brees has won countless games by perfectly executing a well practiced two minute drill, but this also isn’t the first time the team has blown a trip to the NFC Finals in the very last play of the game. This also happened against the San Francisco 49ers back in 2012. 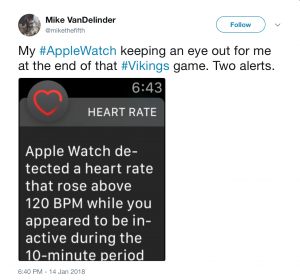 What’s unique about this game is that the suspense had gotten so intense it was actually setting off the heart issue warning on Vikings fans Apple Watches. Although my sensor didn’t go off, I had my Apple Watch on during the game as I was nervously rocking back and forth repeatedly wiping my sweaty hands on my pants. I had seen this before and knew that it truly isn’t over until it’s over. While I’d like to see Minnesota win their first Super Bowl this year in which would be a league first, home game Super Bowl. I’m sad to realize that this might possibly have been Drew Brees’ last chance at another Super Bowl. With that in mind, at this point, I’d just like to see anyone beat the Patriots.

The Vikings-Saints game was so crazy, Apple Watches told fans they might be having heart issues